The turn of the 20th century was an explosive period in the growth of Christian Science and Morristown, New Jersey was no exception.  In 1903 this area caught its “glimpse of glory” when three residents experienced remarkable healings in Christian Science.  A small group met in the home of one of these three to read the Christian Science weekly Bible Lesson.

In 1928, the Society, with a membership of sixteen, voted to incorporate as First Church of Christ, Scientist, Morristown, New Jersey.  In addition to local activities, the church was active during World War II as the members of this branch church worked closely with the global Christian Science Wartime Activities Committee.

In 1947, the property at the corner of Morris and Washington Streets, opposite George Washington’s Headquarters, was purchased (see pictures below).  The membership elected to erect a Colonial-style structure that would blend harmoniously with the Headquarters building. This site had been the encampment area for Washington’s personal guard during the winter of 1779-1780.  When ground for the church was broken, historians sifted the excavated soil, but found no mementos of that memorable winter.

The church cornerstone for the current location was laid February 21, 1950, and just six months later, the first services were held. In 1965, an addition increased the size of the Sunday School wing and added a Children’s Room to the structure.  Members and attendees continue to work diligently to maintain the beauty and upkeep of our church home.

Today we remain active in the community through participation in various areas such as the Morristown Clergy Council and donations to the local Interfaith Food Pantry.

We hope you’ll visit us! 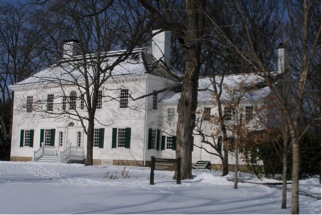